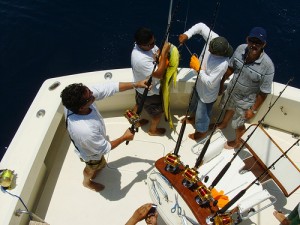 This is the warmest area in Costa Rica and it also receives the lowest amount of annual rainfall. Despite these climatic facts, the fishing remains excellent offshore, inshore and in fresh water. Sailfish are a very popular species that fisherman pursue and great underwater habitat for these fish can be reached in a relatively short period of time, usually under an hour. Other hidden benefits of the fishing trips include the incredible scenery and the sightings of the occasional whale and sea turtles. For some people who go fishing the tuna may be the ultimate quarry to pursue or perhaps the roosterfish. Grouper also command a great deal of attention from anglers and those that chase them often wind up catching other species of reef fish, too. The fact that the local restaurants will prepare and cook your catch for you also, makes fishing in this area even more appealing.

This centrally located area in Costa Rica remains the most commonly visited area for deep sea fishing. Anglers will find that deep waters produce large numbers and high quality specimens of popular fish species all year long. A testament for the excellent fishing points to the fact that fishing tournaments, that attract a great deal of attention, are held in this area annually. Jaco is attractive to the sport fisherman who seek a battle with a marlin or a sailfish. Deep water is crucial to sustain these popular billfish and the depths are less than an hour away. Manuel Antonio is consistently, the most popular fishing destination in Costa Rica. The reasons for this includes the predictably calm waters and the dense population of billfish species. The inshore action is very hot as well, so there are great opportunities for anglers with a wide variety of fishing interests.

This area of Costa Rica accounts for a majority of all IGFA fishing records. This kind of history gives these fishing waters great appeal and allure for novice and experienced anglers, alike. The fertile shallow waters contain huge numbers of baitfish, which contributes heavily to the large concentrations of game fish species. The sail fishing opportunities are so good here that it is common for one boat to land over a dozen fish in a single day. Trolling also offers another method in which anglers can target additional species like the tuna and the huge dorado. Jacks and roosterfish are two more species that are known for their strong fights, which also are found here in great abundance. Whales and several species of sharks are commonly seen in this area also, which adds to the overall experience and helps to create vivid memories for a lifetime. Like other areas in Costa Rica, deep water is nearby which allows fisherman to quickly travel between inshore fishing and the highly desirable, big fish opportunities in deeper waters.

This northeastern section of Costa Rica is very remote and only accessible by small plane or boat. The land is blanketed in rain forests and is home to a large population of sea turtles that return each year for nesting purposes. The Tarpon are responsible for the great fishing reputation that this location has developed over the years. While 100lbs is a big fish, these monster Tarpon occasionally break the 200 lb mark, which makes for quite a challenge since this fish are really strong fighters at any size. Tarpon are actually classified as one of the most difficult fish to land because they frequently jump up to 8 feet in the air and are known for their hard runs, away from the boat. These two factors result in the fish being natural experts at getting off of the hook too. Deep waters are nearby if additional fishing opportunities are sought and excellent snook fishing exists in inshore areas.

Lake Arenal is the choice destination of fresh water anglers who are in pursuit of the rainbow and tiger bass species. This lake is man-made and is also the largest lake in Costa Rica. The experience here goes well beyond the fishing with the screams of howler monkeys, in the area, and the with the abundance of true rainforest scenery. There is ample natural cover in the lake, coupled with the large populations of fish, which create a winning combination for fisherman who enjoy the challenge of using artificial lures to catch the fish. Caño Negro is not well known, but it offers some truely unique opportunities in the eyes of any fisherman. There are freshwater Tarpon that call this area home as well as stable snook populations. These dark-colored Tarpons can reach a massive 7 feet in length and, like there salt water cousins, put up a legendary fight that is sure to test the strength and stamina of the most experienced fisherman.