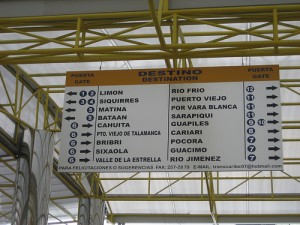 Costa Rica is one of the most beautiful and interesting travel destinations in the world. But to experience it at its best, you need to get off the beaten track and travel the rocky roads. For a budget traveler the option to rent a car is not exactly a good idea and the best alternative is bus travel.

Getting to/from Costa Rica by Bus – from Another Country

There are bus services from the near-by countries of Panamá, Nicaragua, Honduras, El Salvador, Mexico and Guatemala.

>>read more about Getting from Costa Rica to Panama

Getting around Costa Rica by Bus – between cities

Within the country there is an extensive bus system , which is also very cheap. But be careful when you choose the destination. In Costa Rica many towns and beaches have the same name. If you are not careful you may end up in the opposite corner of the country and not where you planned to go.

Buses vary from luxurious buses with rooms for legs and storage, used on the long distance routes, to small school buses on the local routes, with no room for storage. Buses are not made for tall or large persons, so you might feel a bit cramped if you fall into one of the two categories.

Drivers usually speak only Spanish and you can forget about finding the scheduled published somewhere. You’ll have to do the research ahead of time (at the local Tourist Office , for example).

Long distance buses are usually full during the weekend and the holidays. So arrive at the station earlier rather than just before the departure. Most buses leave from the Coca- Cola station and from near-by terminals.

Tracopa offers services to and from south Costa Rica. Grayline offers connection within the country and also provides links to/from the airports. Interbus also offers transfers , as well as private shuttle between hotels throughout the country. EasyRide services the entire country in modern minibuses

Getting around Costa Rica by Bus – within a city

The bus system in San Jose is reliable , extensive and cheap. When traveling in the metropolitan area of San Jose buy the tickets (boletos or tiquetes) in advance. Even with a map, getting around in San Jose can be tricky as the city lacks signage and the locals are used to giving directions based on Barrios (neighborhoods), which are poorly marked on the maps and you cannot even find them on the street signs.
A city block is considered 100 meters regardless of how long it really is.

The fares can be found on this website (Spanish only; Tarifas Vigentes – Transportes – Buses and choose the first file from the top. A XLS file will open).