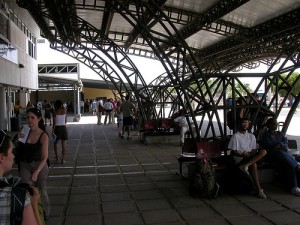 Liberia is the capital of Guanacaste province, Nicoya Peninsula. This province is fast becoming the new gateway into the sunny beaches of Costa Rica and has become more and more popular among tourists from all over the world. The old colonial charm surely adds to the appeal of this city.

The international airport serving the city receives scheduled flights, as well as charter flights from many airlines from North America and Europe. Many low cost carriers also fly into Liberia.

There is a local bus which connects the airport to the city and you can also choose a shuttle.

The following low-cost carriers fly into the airport:

How to fly budget airlines to Liberia, Nicoya Peninsula

The majority of low-cost carriers offer seasonal flights into Liberia, so it does take a bit of planning to grab a cheap ticket. Make sure to check the various sales from the airlines and be ready to make a choice when you least expect it. Should you want to fly outside the travel season then you are limited to only one low-cost carrier flying from the USA and one from Europe. Book your fight 2 to 4 weeks before departure and be flexible in your approach.