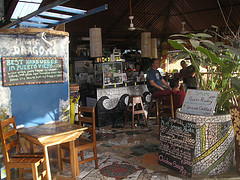 @ E’s Restaurant – Inside of Rocking J’s

Over the years Rocking J’s has doubled in size and added a load of new stuff to the hostels grounds. One such addition is the bar/restaurant, @ E’s (Pronounced, At E’s). This restaurant is quite a win for the weary traveler. Suffering from a late night out by the camp fire and don’t want to stumble into town for breakfast? No worries, make your way to @ E’s for some five star dining on a two star budget.

The culinary guru behind @ E’s is hostel owner, J’s, younger brother Eric. Eric worked in the states at a number of high clubs and bars. He has brought some of his famous dishes to his new Costa Rican restaurant. The menu here consists of a number of local dishes and other worldly dishes that could easily be found in high end establishments.

While the menu isn’t exactly budget priced, it is still a huge bargain for the dishes. No where else in all of Costa Rica can you get a meal of this quality for such a good price. If high quality food here wasn’t enough to sell you, Eric always has several daily specials and nightly drink specials.

In addition to the already lively nightlife around the hostel, Eric organizes regular open mic nights and live music. So if you’re tired of rice and beans and looking for a chill place to relax and enjoy some good food, make your way to @ E’s