Getting from Liberia to Arenal (and return) 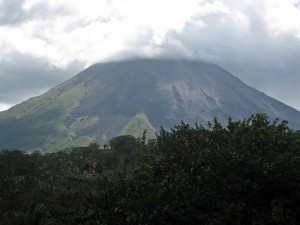 Liberia features colonial style buildings and is the gateway into the beaches of Nicoya Peninsula, as well as the national parks in the area. It used to be a gathering point for the ranching communities, as well as a hub for transportation of all kinds. Thanks to the new airport which opened close to the city, Liberia is now even a larger hub in the area.

The Arenal Volcano is one of the must visit places in the country. The abundance of the activities to do here, makes it a heaven for adventure lovers. Until late 2010 Arenal Volcano was the most active volcano in Costa Rica, but has entered a resting phase. No one knows how long it would take, but meantime you can enjoy the views and not focus on the eruption itself.

Although the distance between Liberia and Arenal Volcano is rather short, the lack of proper bus connections, make it a long affair (at least 4h 30 min). And flying is not exactly a cheap option either, so a good option is renting a car and driving between the two places.

Flights from Liberia (LIR) to Arenal

Liberia is served by Daniel Oduber International (LIR), located right in the city. It is a major hub for those who visit Western Costa Rica and the Pacific Coast.
Nature Air offers direct flights from Liberia into La Fortuna, located close to the Arenal area.

In the travel season, single fare starts at US$98 (the flight is via Tamarindo), while return fares start at US$276. Flights can be booked online.

Buses from Liberia to Arenal

The scheduled can be checked here but they do not list prices.

Driving from Liberia to Arenal

You can rent a car and drive from Liberia to the Arenal area. The shortest route is 126 km and you should be able to cover it in about 2h 10 min.