Getting from Costa Rica to Nicaragua (and return) 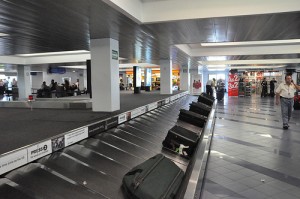 Nicaragua is the largest country in Central America and has coastlines both at the Caribbean Sea and the North Pacific Ocean. Travelers come to Nicaragua for the beauty it has to offer. Whether you look for eco-tourism, beaches, adventure travel or colonial cities, you’ll find them here.

Many travelers choose to visit most (if not all) of the Central American countries during a single vacation, so getting between Costa Rica and Nicaragua (or the other way) is not only popular, but also affordable and easy to tackle.

The cheapest way to travel from Costa Rica to Nicaragua is definitely by bus. You can catch a bus from San Jose, the capital of Costa Rica, and travel to Mangua, Granada, or Rivas in Nicaragua. Single fare is US$26*.

Flights from Costa Rica to Nicaragua

Managua, the capital of Nicaragua, is served by Augusto C. Sandino International Airport (MGA) , which is the fifth busiest airport in Central America. It is hub for La Costena and focus city for Copa Airlines.

Buses from Costa Rica to Nicaragua

The simplest way to get from Costa Rica to Nicaragua by bus is to travel from San Jose to Mangua, Granada, or Rivas on Tica Bus . Regardless of the route, the single fare is US$26. Economic buses depart San Jose at 12 p.m. and arrive in Nicaragua at 2 p.m. , 3 p.m. and 9 p.m., respectively, depending on the destination.

Another option is to take a local bus to the border, walk to the other country and take another local bus for the reminder of the trip.

Driving from Costa Rica to Nicaragua

There is only one border crossing from Nicaragua to Costa Rica if you choose to travel by car. That’s at Penas Blancas, near Lake Nicaragua.

So, rent a car in Costa Rica and drive to the desired destination in Nicaragua but make sure to ask whether the rental company allows the border crossing.

If you drive between the two capitals, there are two possible routes. Both take about 6 hours to drive (422 km). Route 1 (see map below) is via Liberia , while Route 4 is via San Jose de Alajuela.

Note:* price valid at the time the article was written