Getting from Costa Rica to Panama (and return) 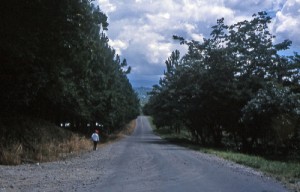 If you need to travel between the two capitals – San Jose and Panama City- then the cheapest and easiest alternative is to travel by direct bus. It takes 16 hours and the single fare is US$35.

Flights from Costa Rica to Panama

Buses from Costa Rica to Panama

Both Tica Bus and Expreso Panama offer direct buses from San Jose to Panama City. The 16 hours journey is definitely the easiest, fastest and most comfortable way to travel between the two countries.

On Tica Bus, an economy ticket costs US$37 one way and US$74 return. Buses depart Costa Rica at 12 p.m. and arrive in Panama at 4 a.m. the following day.

Should you decide to see more of Costa Rica while you are traveling to Panama, you can take two alternative routes. The northern route starts in San Jose, from where you can take a bus to Sixaola, on the Atlantic coast (about 6 hours). Cross the border to Changuinola (Panama) and then take a direct bus to Panama City.
Another option is the southern route which also starts in San Jose. Take the bus to Ciudad Neily (about 8 hours) and from here take the 30 minute bus across the border to Canoas in Panama. From here, take a direct bus to Panama City.

Driving from Costa Rica to Panama

You can rent a car in San Jose, Costa Rica and drive to Panama City, Panama, stopping along the way to enjoy the views and rest. The total drive time is about 12 hours (800 km) and a large part of the road is right by the coast line.

Just for general reference, the route highlighted in the map below is between San Jose and Panama Canal (close to Panama City)

You can also drive from San Jose to David , which is located on the Pan American Highway. David is a popular stop for those interesting in gambling as it is home to some casinos. You can also take a day trip to some hot springs.
There are 350 km between San Jose and David. The drive time is about 5 hours.