Getting to Tortuguero from San Jose 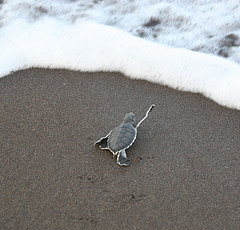 The city of Tortuguero, Costa Rica, is a pleasant little village that is home to only about 600 people, two churches, a few bars and some souvenir shops. It is located between the Caribbean Sea and a network of canals. There are no cars in Tortuguero, and the only mode of transportation within the city is walking or taking a boat. The city gets its name from the Spanish word for the giant sea turtles, or Tortugas, that come to nest on the beaches of the city every year. Tortuguero means either “Region of Turtles” or “Turtle Catcher.”

Tortuguero is the most important nesting ground for the green sea turtles in all of the Western Caribbean. From July through September, thousands upon thousands of turtles come ashore to lay their eggs. Leatherback turtles also come to Tortuguero from March to May to lay their eggs. There is a great diversity of wildlife in Tortuguero, from monkeys and sloths to the Raphia Palm, which has the largest leaves of any plant. Tortuguero is often reffered to as “Costa Rica’s Amazon” because of its large network of lakes and channels.

You cannot just drive to Tortuguero; you can drive to the coastal city of Limon, but then you will have to get on a boat to get to Tortuguero. Your other option is to fly.

If you would rather hop on a plane to Tortuguero, the trip is quick and easy. From San Jose, the trip that would take all day only takes a half an hour. The flight provides an incredible view of the mountain range that is between Costa Rica’s central valley and its Caribbean coastline. It also affords an excellent views of the intricate, narrow canals that wind through the Tortuguero National Park. Nature Air provides one way flights for as little as $70 a person.

If you would rather take the longer, more adventurous route, than you can take a public bus from San Jose to Limon. This route will take all day to complete, so get up early. Costa Rican public buses are actually quite good. The buses are made by Mercedes and have seats that recline slightly. Although the seats are often too close together, the ride is overall very comfortable. The trip to Limon from San Jose takes approximately 4 hours. Once you get to Limon, you take a fifteen minute taxi ride to the port of Moin. In Moin, you get on a boat and go to Tortuguero.

These boats depart at various unscheduled times throughout the day. They generally leave when they have filled the boats with passengers. It is best to arrive as early as possible so that you will not have to wait long for the boat to fill so that you can depart. Prices vary based on the size of the boat and number of passengers. Make sure that you get everything you need in Limon before going to the port, because the trip normally takes anywhere from four to five hours. You can also drive to Limon from San Jose. From the airport, take the Guapiles highway towards Limon. Near Limon, you will see signs for the Bay of Moin, where you will need to board a boat to get to the Tortuguero National Park.

By Way of a Tour

Finally, you can also sign up for an organized tour of Tortuguero. These tours usually leave early in the morning from San Jose. Most tour operators use a different port that is north of the port of Moin, which cuts down on travel time significantly. Most of these tours include lunch and beverages, as well as bilingual naturalist guides. An organized tour is a good way to experience the park in a more relaxed style.