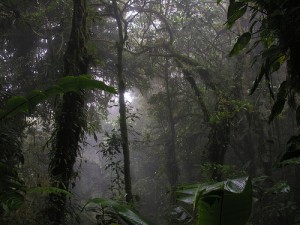 Rainforests have an incredible, magical draw to them. So for someone who especially loves animals, they are truly a nature lover’s paradise! If you always been fascinated by the jungle and yet have never gotten to actually go, then you have got to go on your next vacation to the Monteverde Cloud Forest Biological Reserve in Costa Rica! The park is known as one of the most stunning nature reserves in the entire world, and is home to home to over 2,000 species of plants and trees, a hundred species of mammals, 490 species of butterflies, over 400 species of birds, and about 1,200 species of amphibians and reptiles.

Check out some other things to do in Monteverde.

The Monteverde Cloud Forest Biological Reserve is on the west side of Costa Rica and is in the Puntarenas province. It is about a four hour drive from the capital city of San Jose. The reserve was actually initially created by a group of Quakers in the sixties. Luckily for the rest of the world, they were determined to preserve this watershed area.

The park has a totally unique cloud canopy system. While other rainforests are usually really rainy (hence the name rainforests), cloud forests are comparatively dry. Cloud forests are located at a higher altitudes, making them cloudier than a rainforest. So the plants in a cloud forest actually receive moisture from all the water that is in the air. This makes the park really surreal.

The Monteverde Cloud Forest Biological Reserve has a ton of great trails for hiking, however most of them are not meant for beginning hikers. At some points, the trails are muddy and slippery. And additionally, the cloudy conditions can make it hard to spot animals and birds. But if you don’t want to hike, you don’t have to. You can also take a skywalk or rappelling tour of the forest. In these tours, you go on a series of bridges and cables that offer higher views of the reserve below.

There is an amazing array of wildlife and plants that make the Monteverde Cloud Forest Biological Reserve their home. Tapirs, ocelots, jaguars, pumas, and tons of variety of monkeys. The park is home to Costa Rica’s most famous bird, the rare and beautiful quetzal. The park is also home to a the golden toad. This toad lives nowhere else in the world except for the Monteverde Reserve. It lives on the continental divide and is actually both deaf and dumb. The males of the species are a pretty bright orange color, and at certain times of the year, they are easy to find. The park is also home to more than 300 species of orchids and 200 species of ferns.

If you are planning on going to the park, and you are really serious about seeing the animals, there are several things that you should know before you go. First, because the plants and animals in the reserve are so fragile, only 120 people are allowed on a single trail at a time. Access to the trails are given on a first come, first served basis unless you booked a guided tour beforehand.

If you are an experienced hikers and you want to stay in the park overnight, you can. There are three backpacking shelters within the park, all equipped with bunks, showers, hydroelectricity, propane stoves, and even pots and pans. You will have to bring your own food and sleeping bag, and you will have to make reservations to camp in the park in advance. The huts are locked so that only those with reservations can get in. It costs anywhere from $3.50–5.00 if you decide to stay the night.
Make sure that you bring warm clothing and raingear. The visitors center sells trail maps and wildlife guides, so if you would rather go without a guide, you can. However, since they know the park so well, going with a guide can increase your chances of seeing wildlife.