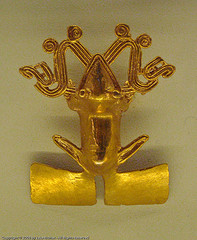 San Jose is home to The Gold Museum. A collection of artifacts that date from pre-Columbian days, this is a must see. Gold artifacts, as you may rightfully assume and they are of all types, from simple to the most intricately detailed. Numbered at 1600 pieces, this collection is dated from 500 AD to 1500 AD. Christopher Columbus is credited with discovering Cost Rica in 1502 and was detrimental to spreading the word about the great supply of gold that was available here.

>>Check out other things to do in San Jose

However, Columbus was mistaken. The gold was not in great supply. It was prized because of its rarity and was used in religious ceremonies. It was also used to establish the difference between the social classes. Until 1982, this fine collection did not have a permanent home. Today The Gold Museum exhibits the pieces in an attempt to open the door to the world as it was in pre-Columbian days. The way the artifacts were used in the daily lives of the people who lived here many years ago is explained as well as their use in religious ceremonies.

The Gold Museum extends underground for three stories. An architectural beauty, a long spiral staircase, is the connection between the three levels. One of the most valuable collections in the world is housed here. Animals of gold appear to be floating through the air. This is because they are hanging by transparent strings. The effect is an awesome sense of being surrounded by frogs, snakes, sharks, insects and birds all floating around in the air.

Two levels of the Gold Museum pertain to the gradual social development of Pre-Columbian art. The Coin Museum is a part of this same building. Containing a history of the money that has been used over the years in Costa Rica, there is also a collection which contains many types of coins that are quite rare and paper money. This is actually one of only a few pre-Columbian gold museums that are in existence today.

This is a true family experience when it comes to the Gold Museum. This is a night tour with special guides who will introduce families to the intricacies of the gold pieces they view. There is a workshop that teaches the repoussé technique, which is the art of forming a pattern on metal by hammering it from the other side. Often used on bracelets and medals, this is fun for the kids because they can use their own design. After the bracelet or medal is made, there is a dinner which is served in the lobby of the Museum.

When visiting The Gold Museum the third level of the building is where the gold pieces are located. This section has a video to introduce visitors to the pieces they are about to view.

There is on the premises a museum store. Here you can purchase replicas of any pieces you saw on display that especially caught your eye. There are also facilities for special tours. The Gold Museum has guided tours for virtually any group size up to 150 people.

Many of the gold replicas of animals on display in the museum are the last remaining cultural myths for the people of Costa Rica. The importance of learning how their ancestors lived and their beliefs is going to be lost if it is not imparted to the young generation now. This is why the effort has been made to preserve the artifacts that have been rescued and put them together in one place for viewing.