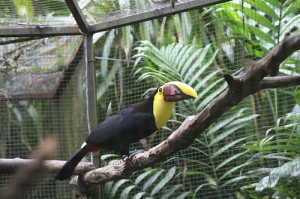 Costa Rica is a must see if stuck in San Jose. The Zoo is named after the General Simón Bolívar who was famed for his escapades in South American independence and was opened in 1921 some 5 years after the original plan began its fruition. The original concept was to provide shelter and protect endangered animal species in a safe environment, as well as serve as a scientific research facility and of coarse provide education about animals and their habitats to the public and scientists alike. The origins of the zoo stem back to the ‘Garden of Plants and Animals Institute of Costa Rica’ which was founded back in 1884 by Henry Pittier Prommond, and was originally near the Liceo De Costa Rica. This had to be moved when residents who lived close by complained about all the noise from the animals at the facility. So it was moved to the northwest of San Antonio close to Barrio Otoya.

..Check out our other things to do in San Jose.

The local name for the zoo is Parque Zoológico Simón Bolívar and is part of the Fundazoo project. Although not the largest zoo in the world it is interesting nevertheless. The zoo is part of many programs involving wildlife which you can learn about on your visit via the excellent education and tutorial exhibits within the park, most of which are in both Spanish and English.

Every year the zoo tries to have something new to offer and among some of the major changes that are still ongoing are the facilities in which the animals are kept. Not too long ago these cages were looking a little aged, but gladly and importantly this is changing for the better.

One of the main missions of the Simón Bolívar National Zoo is the preservation of indigenous species local to Costa Rica and the park does not disappoint. Visitors are treated to some local animals that you will only ever come close to in the zoo itself; unless of course you spend many years looking around the country’s jungles and wilderness’s.

Animals in the Zoo

Among the wonderful animals from Costa Rica, Asia and Africa housed at the zoo are the cheeky white faced monkeys and many species of birds including various parrots, toucans, cranes and eagles. All housed in exhibits that closely resemble their natural habitat.

There are many cats from both the big and small groups including favorites of both children and adults, the lions. The jaguars seem buoyant and happy to and will often come in close for the cameras.

The crocodiles are a fun and interesting sight along with other reptiles such as turtles and various lizards, which can be seen in their entire splendor.

Among the usual suspects are foxes, raccoons and other rodents and marsupials which are very entertaining so make sure you don’t forget your camera.

What we have to remember is that this is a zoo in a third world country. It is there to help preserve species that need a little coaxing when it comes to survival. It is a shame when you read some previous bad reviews about the zoo and its inhabitants. The reviews are often not at all in any way an accurate description of what is actually a very good zoo for its size. It is a wonderful and beautiful location and place; all who are involved in projects at the Simón Bolívar National Zoo are doing a fantastic job. Although this is not to say that the zoo probably could do with ongoing investment that would surely help create some very good projects and updating for the zoo.

Not everything can be seen out and about in the zoo; there is a lot of behind the scenes with improvements to facilities and the work going on in the various research projects and funding projects. You can find out more about this through the education facilities on site and by just simply asking the keepers who are more than happy to answer your questions. So don’t be shy, they are quite knowledgeable!

All in all you will have a wonderful experience at the Simón Bolívar Zoo, it is well worth the visit. The zoo is one of the more exciting things to do when you are stuck in San Jose for a few days.