Things to Do in Drake Bay

Due to its lack of commercial everything, Drake Bay made it on to our list of the top 10 cities in Costa Rica. While the area has gained some hotels and tour operators over the years, it is still very much untouched compared to some of the other popular destinations in Costa Rica. This is about as unspoiled of a place as you are going to find in Costa Rica. While the area is quaint, there are still a number of things to do in town and in the surrounding area. Here are a few of our favorite things to do in Drake Bay.

If you have any suggestions, let us know and we will add them to the list. 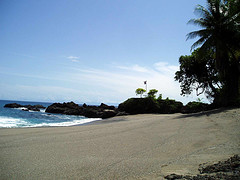 Visiting Isla del Caño and the Caño Island Biological Reserve is one of the most popular things to do Drake Bay, Costa Rica. The island is about a twelve mile boat ride from Drake Bay and is worth the journey. The island has beautiful coral reefs filled with fish and other wildlife which are waiting for a scuba diver to discover them. In fact, Isla del Cano is one of the most popular scuba diving locations in all of Costa Rica. The island also has beaches which allow easy access to the coral reefs for snorkelers.

Isla del Cano was also once home to a pre-Colombian civilization and is a great place to explore for the afternoon. The island has a cemetery and is home to some of the stone sphere sculptures that Drake Bay is known for. These stone spheres are thought to be carved by the ancient civilization that used to inhabit Drake Bay, but some mystery still surrounds them.

The Night Tour with Tracie 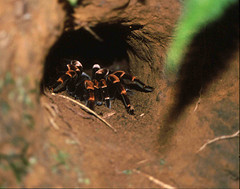 The Night Tour with Tracie is not for the squeamish or faint of heart. Tracie Stice also known as the bug lady leads nightly tours into the tropical rainforests to find and highlight the many bugs and insects that populate Drake Bay’s tropical rain forests. Tour goers should expect to see praying mantis, frogs, moths, and even snakes. Lucky Night Tour participants may even spot a tarantula or boa constrictor.

“The Bug Lady” Tracie Stice may know every fact and history of every bug in the rainforest but her approach to The Night Tour is definitely not boring or nerdy in any way. In fact, one of the many things she has researched is the military use of insects. Another interesting fact about The Night Tour is that there are very few biting bugs or mosquitoes on the tour so bug spray is often not necessary and fears of being led into the rain forest to be carried away by mosquitoes can be put to rest. 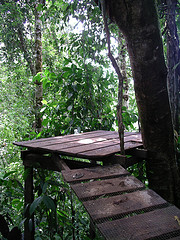 When most people think of visiting the rain forests of Costa Rica, they think of traveling above the forest canopy on cables. The Canopy Adventure in Drake Bay does not disappoint. The six traverse cables link a series of platforms and raised walkways that allow you to soar above the rainforests wildlife and plants and truly get a bird’s eye view of one of the world’s last unspoiled tropical rainforests. One traverse cable is over three hundred feet long. The tour ends with a sixty foot rappel down to the ground near a stream.

Getting to the Canopy Adventure is also part of the fun, since the location is so remote you have to either arrive by a 4 x 4 or horse back. This adventure is a must do for anyone who seeks a thrill, loves to get back to nature and see the rainforest in its purest form. 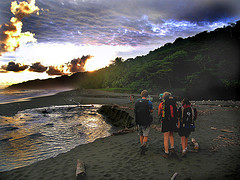 Corcovado National Park is home to the endangered baird’s tapir, American crocodile, jaguar, pumas, and even bull sharks. As with many tropical lowland rainforests Corocovado is also home to monkeys and a large array of plant life. Photographers will have the photo opportunities of their lifetime at Corcovado National Park.

The park can be walked in approximately two to three days by people in reasonably good fitness and there are a variety of guided tours available. Visitors can sleep overnight in a variety of ranger stations positioned throughout Corcovado National Park. Read more about camping in Costa Rica.

Visitors to Corcovado National Park may be drawn to the twenty three miles of beaches all of which remain unspoiled. There are also a variety of rivers and streams through the park. Swimmers should be careful because there are sharks and crocodiles in certain areas. Experienced guides lead tours through the park and know the safest places to swim and night swimming is even popular in some areas of the park.