Things to Do in Monteverde

The quaint mountain town is one of the must stop places for anyone coming to Costa Rica and wanting to do some zip lines and canopy tours. While the area is famous for its amazing canopy tours, it actually has a lot more to offer than just sheer heights and views. This area is known as the could forest for a good reason. Do your self a favor and engage in some of the activities below to get a real sense of the town of Monteverde. 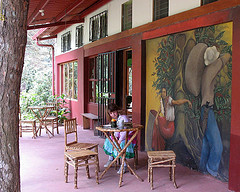 Coffee aficionados will be thrilled to visit the highlands where the famous Cafe Monteverde is made. Located at about 3,500 above sea level, the coffee farm first began in 1989 as an income-generating project for the local farmers. Today, it is a coffee paradise where the best coffees are produced and exported worldwide. The coffee tour consists of a walk through the farms and interactions with the community’s farmers, conservationists, and scientists. Besides coffee, the farms support a wide variety of crops, such as bananas and citrus fruits. Why did they grow these other plants? A coffee guru would explain that these plants, along with the soil and climate, create the aromatic subtle flavors of Cafe Monteverde. After the tour, visitors can stop by the retail coffee shops to savor different roasts of coffee. Arrangements to have this coffee tour must be made with the Cooperative of Santa Elena. 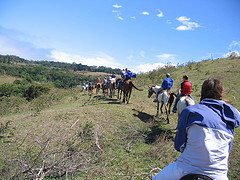 Adventurers must not pass up this chance to explore the area near the Monteverde Cloud Forest. The forest is an ecological reserve but it is possible to see breathtaking views of canyons, mountains, open fields, and the Gulf of Nigoya by following the trails of Emiliano’s family farm. The farm is about 139 hectares with numerous riding trails. The horses are cared for by Emiliano’s son who is a veterinarian and the trails are private. Besides the twittering of birds and the rustling of leaves, only the sound of the horse’s hoofs will blend with the exhilarated beating of the heart. Horseback riding can be scheduled either early in the morning for those who wanted do bird watching or late in the afternoon for those who wanted to see romantic sunsets. 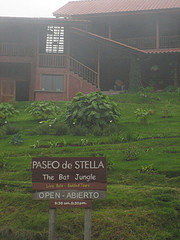 Spelunkers, nature lovers, and everyone who is fascinated by nocturnal creatures should visit the Monteverde Bat Jungle. Located in Paseo de Stella, the Bat Jungle can be simply described as an exhibit of bats. But it is far more fascinating than a regular exhibit. The Bat Jungle has a special area called Bat Habitat where 40 live bats of seven different species are protected inside a 52-square-meter flight space. Visitors will see through glass how bats eat, fly, sleep, and even talk. That is, visitors will hear through a modified special microphone the echolocation sounds made by bats. Dr. Richard LaVal, who spent 40 years of researching all about bats, called the microphone the “Bat Detector.” 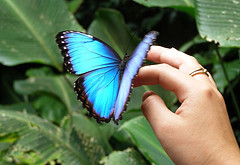 Mariposario is an enchanted garden of butterflies. It is located in Cerro Plano, outside the town of Santa Elena towards the Monteverde Reserve. Mariposario is actually composed of four different butterfly gardens, a medicinal garden, a biodiversity center, and a leaf-cutter ant colony. The Mariposario has more than 50 species of butterflies including the exquisite Blue Morpho, the rare Zebra-Wings, and the elusive Glass-Wings. Mariposario also shelters the Calico butterfly, the only butterfly species that is capable of producing sound. Butterflies are very sensitive to temperatures. This is why each of the butterfly gardens is climate-controlled. The medicinal garden, however, encourages visitors to have a self-guided tour. Jim Wolfe, the biologist who founded Mariposario, and his wife Marta Iris, have collected more than 70 species of medicinal plants. The biodiversity center is ideal for those who wanted to see a butterfly emerge from a chrysalis and to learn more about these insects with beautiful fragile wings. And finally, the leaf-cutter ant colony is a fun opportunity to see these busy leaf-carrying ants at work. 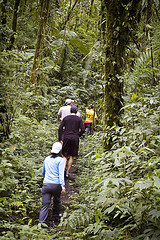 There are three different places to conduct eco-hiking. Two of them are managed by the Monteverde Conservation League and third one is a free public hiking trail.

The first hiking destination is the Children’s Eternal Rainforest. Costa Ricans call it the “Bosque Eterno de los Ninos.” Spanning more than 22,000 hectares of secondary forests, the Children’s Eternal Rainforest is the country’s largest private preserve. It is adjacent to the Monteverde Cloud Forest and it is populated by more than 700,000 trees. There are two biological stations inside this rainforest. The first is located in San Gerardo where visitors will have a panoramic view of Volcan Arenal, one of Costa Rica’s most active volcanoes. From San Gerardo, hikers will have access to about 5 kilometers of trail. The second biological station is located at Poco Sol where visitors will be treated to the luxury of a nearby peaceful lake and a waterfall. From Poco Sol, hikers will have access to over 10 kilometers of trail.

The second eco-hiking destination is at Bajo del Tigre. The trails are not as expansive as those inside the Children’s Rainforest but the Bajo del Tigre represents a unique habitat. The area is endowed with an unusual array of plants and animals. Visitors will have the opportunity to spot the mot-mots, the agoutis, the toucans, and the white-faced monkeys. To observe the rich diversity of nocturnal creatures, visitors may take the Twilight Walk, a guided tour that starts at 5:30 pm. Bajo del Tigre also has a children’s house that aims to teach environmental awareness.

And last but not the least, the third eco-hiking destination is a trail that leads to Cerro Amigos, the highest peak in Monteverde. At the top, visitors will have a view of the cloud forest, the Volcano Arenal, the Pacific Ocean, and parts of Nicaragua.